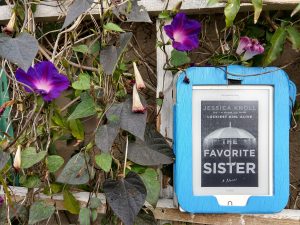 Don’t be fooled by the umbrella, the cover art doesn’t have much to do with the actual story.

The Favorite Sister by Jessica Knoll takes a cheesy reality show that you’re barely interested in and fills it with secrets that twist and distort what you think you know and suddenly, you find yourself drawn into the drama.

The reality show is Goal Diggers, a production focused on young entrepreneurial women that are now millionaires without the help of a man. There is the stunningly beautiful author, Stephanie, the vegan hippie juice bar CEO, Jen, dating app founder, Lauren Bunn (aka Lauren Fun!), and the lesbian founder of a spin studio with a charitable mission, Brett.

The queen of these so-called boss babes is Jesse Barnes, the creator of the show. Don’t be fooled by her hipster slang or blue hair, she is much older than the Goal Diggers, but tries desperately to remain young and relevant. To shake things up in its fourth season, Jesse decides to bring in Brett’s prettier, ditsy sister and her daughter to set up some sibling rivalry drama.

The story is a fun mind game that made me feel like I was a long-time viewer of the show. In the end, I was both rooting for them and against them. I wanted to see them fight each other and reveal betrayals that I’ve suspected all along. These characters are familiar because they’re similar those roles often featured on reality shows: the bossy one, the drunk, promiscuous one, the peacemaker. It eases the reader to get caught up in the drama, waiting to see how the next scene will blow up.

I did not expect to like this book very much. I don’t watch a lot of reality TV,  so I was rolling my eyes from the first few pages in. I started it and put it down and started it again. I was waiting for another book to be checked out to me when this one came up as a suggestion. “Alright,” I thought, “I’ll give it a shot.”

Despite my hesitations, after 20 pages, I couldn’t put it down. I spent all weekend reading about the Goal Diggers’ pasts and scandals. The beginning was a little confusing since the story is told out of order, but it got better as each chapter revealed a different character and perspective to the story.