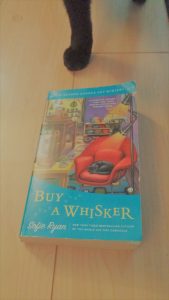 Dora rates this book “one paw.”

After the success of their first murder investigation, Charlotte’s Angels are back in Buy A Whisker, book two in the Second Chance Cat Mystery series by Sofie Ryan. The senior ladies: Charlotte, Liz, and Rose, (and their friend Alfred, an old timer hacker) are ready to expose the truth with their investigation services operation –headquartered in the Second Chance shop, of course.

The Second Chance shop, owned and operated by North Harbour, Maine resident Sarah Grayson, features repurposed goods. The unique shop attracts many tour bus customers, but Sarah knows business could be better. With the prospect of a new development in the works, the tourist town is overjoyed by the possibilities of bringing in new customers and updating it’s image. Everything is in place for the development to go through except for one business owner’s approval.

Local bakery owner Lily Carter refuses to sell her property, inherited from her grandfather. She declined the developer’s offer, which has resulted in outrage from the town in the form of petty pranks, threats, and pleas for her to change her mind and accept the deal. When Lily is found dead on the basement stairs of her bakery, it isn’t surprising that the police think there has been a homicide.

The suspect list is long: it could have been any shop owner depending on the development or money they would receive from selling their property. Is it possible it was the developer himself? Or maybe a newcomer? When one of the Angels, Liz, is moved to the top of the suspect list, the Angels set out to find the real killer. Sarah is depending on Elvis, her feline with lie-detecting abilities, to help her solve the mystery before her friends put themselves in danger.

Overall, this installment was much better than the first in the series. I am in love with Elvis and have finally warmed up to Sarah and her Second Chance crew. Elvis’s personality reminds me so much of my own all-black feline, Dora. While Sarah finds herself arguing with Elvis over her seat, I find myself having the same arguments with Dora. Finally, I give in and share the seat with him.

There is not much of Sarah’s grandmother, Isabel, in the story, even though all the ladies that work with her are her Grandmother’s friends and Isabel supposedly lives the on the upper floor of her house. Maybe that’s the gag? We do learn more about the other ladies: Charlotte, Liz, and  Rose, who reminds me of Betty White.

I’m still not sure about some of the minor characters. There are brief moments where the dialogue goes from cozy to cheesy and I have to put the book down, close my eyes and let out a deep breath, particularly around Sarah’s friendship with her teenage crush, Nick. I’ve never accidentally fallen into the arms of a male friend and if I did, I probably wouldn’t stare into his eyes. As for her work companion Mac, I would prefer to read a little less about his muscles and more about his mysterious past.

I bought this copy at my local library’s book sale, but am delighted to see the rest of the series is available on my library’s OverDrive app.