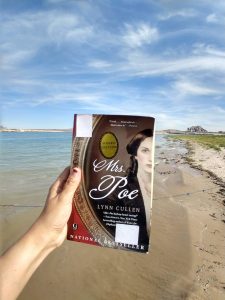 Imagine the time when the famed poem “The Raven” was brand new, when the world was captivated by the repeating “Nevermore!” It is the 1840s, where gatherings in New England are being held weekly to discuss economics, art, and the gossip of other prominent writers. This is the setting of Mrs. Poe by Lynn Cullen, a wickedly creepy and mesmerizing story that will transport you to the Romanticism period of American history.

Frances Osgood, wife of the famed painter and flirt Samuel Osgood (these are real people by the way) can’t help but be interested in the man from Boston, being from a wealthy Boston family herself before being disowned by her parents for her own reckless marriage. Her husband Samuel is off gallivanting with whatever current heiress he’s busy “producing a portrait” for and hasn’t been seen in months. Lonely and struggling to provide for her daughters on her own writing, Frances sees an opportunity to expand her earnings, if only she could write as dark as the famous Mr. Poe.

The members of New York society are enthralled by the works of Edgar Allan Poe, who jumps the ranks of obscure poet and writer to desired party guest. What’s even more delicious is that he has chosen to move to their community, and has brought along with his mysterious wife – the young Mrs. Virginia Poe, who was barely 13 years old when the two cousins wed nearly 10 years before. It is with such a flurry of excitement that the salon Frances frequents has managed to convince The Poes to join their soiree.

Mrs. Poe is a delicate woman with a horrendous cough that keeps her home for most events. Except that she suddenly keeps showing up unannounced at Frances’s home or constantly inviting her over, actively seeking her attention and trying to win her friendship. Mrs. Poe’s insistence on a friendship bores Frances, but as her own friendship with Mr. Poe seems to blossom, she can’t help feeling like she’s being watched and set up by the sickly Mrs. Poe. These frequent and unexpected meetings with the Poes is causing quite a stir in her community, and for the married, but separated Frances, this can only result in scandal.

I became obsessed with reading this book and enjoyed experiencing the 1840s safely from the 21st century. I didn’t realize how many important literary and American figures were among Poe’s peers: Graham, who inspired the graham crackers, Audubon, Dickens, Walt Whitman, Melville, Louisa May Alcott, and Nathaniel Hawthorne. These people and their re-imagined lives are woven in the story and some of them are just at the cusp of future famous lives. I also learned from reading this book that Samuel Morse was a painter first before inventing the famous Morse Code and his motivation behind his invention. This definitely sparked a trip down the Wikipedia rabbit hole.

I know it’s historical fiction, but I learned a lot about the time period and had a fabulous time trying to decipher if Frances was being paranoid or if the jealous, childish Mrs. Poe was really out to get her. Cue the Rockwell!

Drink of Choice: Hazelnut latte with oat milk from Rail Side Cafe.