It was evening when Joey and I walked along a dock of Moss Landing to get a better view of the seals resting on the shore in the marina. In the distance we heard the distinctive arf-arf of some sea lions, but much closer we heard knocking. Knock-knock-knock came again from under the dock. Something was under there. A family was laying on the dock, stomachs down and squealing. Even their dog knew something exciting was happening by the way he whined and pulled on his leash. Joey and I leaned over the dock to get a closer look at the water and out popped an otter!

I have never been this close to an otter in real life without a glass window between us. It was magnificent and terrifying to see such a creature up close. I watched it swim around in circles and continue to pull shellfish from under the dock and use the dock to crack open its treats. I was surprised that this one otter was approaching the dock with people and a dog standing on it, but it didn’t seem to bother the otter at all. The dog wanted to sniff it. I wanted to touch its fur, but its clawed paws changed my mind. Moss Landing wasn’t on our itinerary and yet it was one of the most astonishing places we visited on this trip. I had started the day anxious to catch some rays and splash waves. It was the perfect ending to my Beach Day. 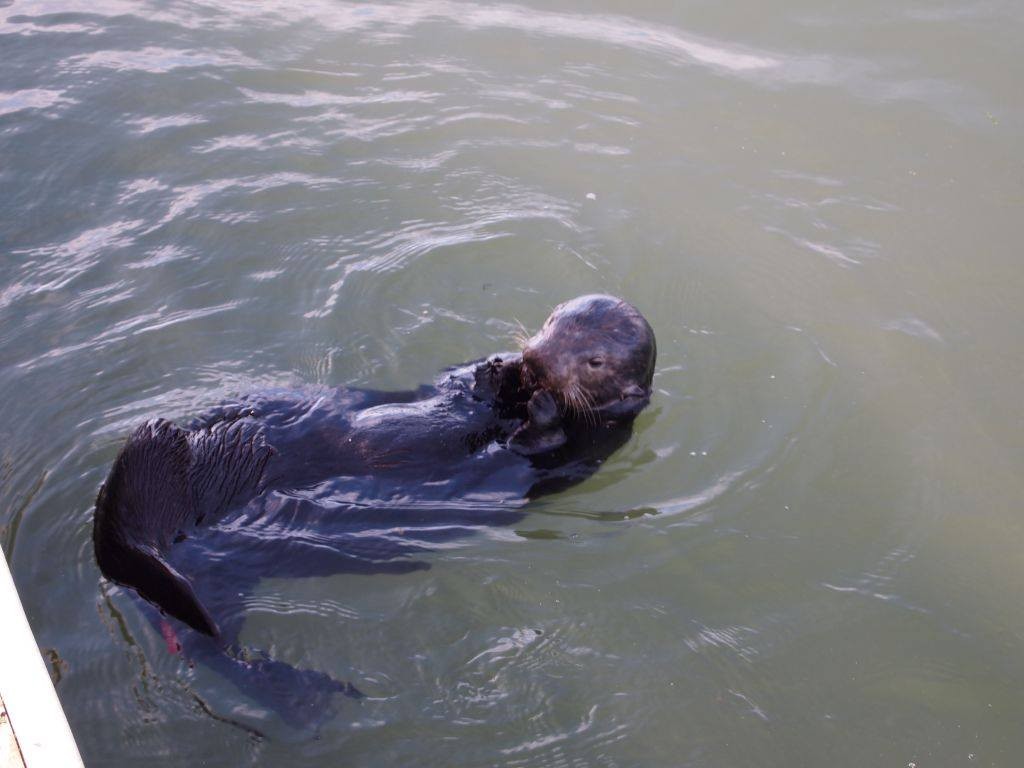 Beach Day started off exciting. It was a short walk to the beach from our hotel. I had my sunglasses, beach chair, and reading material all ready to go. Joey and I planned to spend the day with our feet in the sand, listening to the waves and reading. I chose Oscar Wilde‘s The Picture of Dorian Gray, a gloomy novel, which seemed like a great contrast to the California sun. I was mistaken. Back at home, temperatures were in the 90s,  but on the beach in Marina, the coastal wind was blowing and temperatures were down. It seemed like everyone but me was wearing a sweater instead of a swim suit.

After 40 minutes, I couldn’t enjoy beach day any longer. It was 58 degrees and the water was cold.  I was shivering under my towel, which I had wrapped around my body like a blanket. I didn’t even open my book because I didn’t want to remove my arms from the warmth of the towel. I felt like I needed a beach Snuggie. Even rubbing my arms and singing The Hukilau Song couldn’t get my mind off how uncomfortable I was. Beach Day was a fail. However, it was only noon, so we had the rest of the day to explore something else. Joey suggested that we visit the Elkhorn Slough National Estuarine Research Reserve.

Visiting Elkhorn Slough wasn’t like any walk through a state park or beach, this was a walk through the backyards of native plants and animals. There weren’t any campsites or vehicles, but there were trails, designated looking spots and benches. In the visitors’ center, more than a dozen native plants were on display, each specimen in a vessel of water because these weren’t just illustrations of the flora in the estuary, these plants and flowers were real –and  freshly picked!

For the very reasonable price of $4.12 admission each, we were able to walk through the slough.  I was worried about getting mosquito bites since it looked so muddy, but I didn’t. Joey and I walked most of the paths, about four miles total.  We were told there may be otters and rays in the water, but we didn’t see any. Along the trails we passed a abandoned barn and a group listening to a guide dressed in a silver cape. We followed the route down to a dock that overlooked a gray muddy area. On our stroll, I saw two snakes, a dead lizard, a ladybug, and the usual sea birds. The surprising feature of our walk was the micro-climates: toward the edge of the water it was breezy and cold, uphill, the air was stagnant and hot.

Driving away from Elkhorn Slough, I saw a few goats munching in their yard close to the highway and I squealed with delight. While driving up north, I mentioned to Joey that if I see goats again on this trip, I want my picture taken with them. Joey stopped the truck and I crossed the highway to a small patch of grass near one of the goats. Joey snapped my picture and then we noticed that a few more goats showed up and a minute later, even more had joined the party. Instead of standing next to one goat, I was now surrounded by a whole tribe of them. (Yes, I had to look that up.) I laughed. I just wanted my picture with one goat, but I felt like a celebrity by how many photo-bombed me. 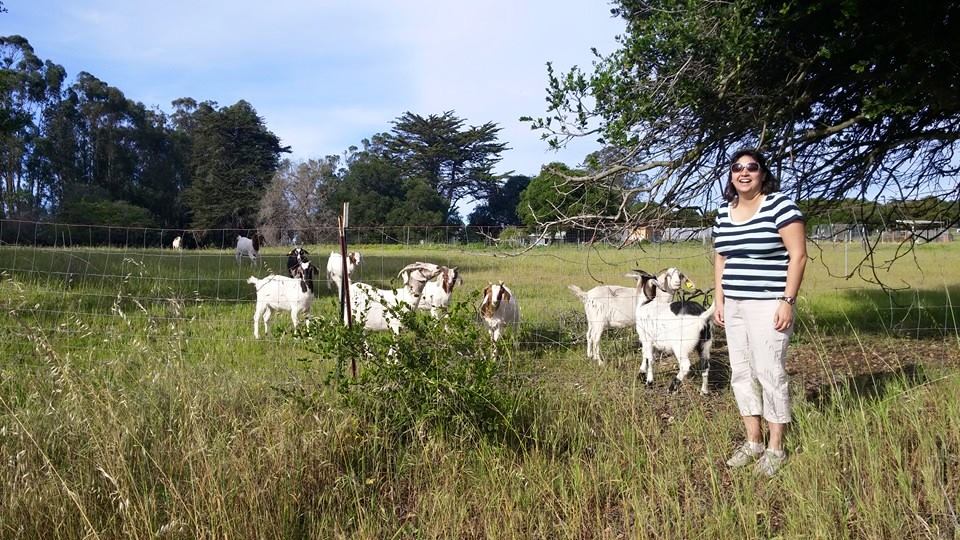 This is part two of a four part series on traveling to and around Monterey, CA.