For our first wedding anniversary (03/14/2015), Joey and I decided to celebrate by going on a short vacation. Since I’m still not back at work full-time, we didn’t feel right splurging on going somewhere exotic, international, or, really, anywhere that needed a plane ticket to get there. Instead, we chose a destination that would take less than a day of driving: a road trip to Monterey, CA, one of my favorite places to visit. Monterey is very exciting for literature nerds like myself, but our first stop on our vacation was actually 50 miles outside of the city at Pinnacles National Park.

My first visit to Pinnacles was in 2012, when the national park was still only a national monument. We visited the west side then, the less popular side of the park. It was also July, so that may have added to the emptiness of the park. Then, Joey and I climbed through pitch-black caves, the only light we had came from a cheap LED flashlight I kept in the car for emergencies. The caves inside were cool, but the air outside was overwhelming and the heat made our already out-of-shape bodies struggle through the hike. This time, we visited the eastern side of the park. I anticipated more of the same cave climbs, but was disappointed.

Immediately from the drive in, I could see why this area was more popular. The road was lined with vegetation, there were camp sites with tents set up, and lots of children running around.  Unlike our isolated trip the last time, this hike was disrupted by noisy kids and families. The hike through the caves wasn’t as dramatic as it was on the west end. We used our flashlights, but we didn’t really need them because the trail through the hike was well lit and easy to walk on. We made it through the caves and up a tiny stairwell to a pool. These stairs were very much like the stairs leading up to Moro Rock in Sequoia National Park, which can be quite narrow.

I like to enjoy nature by listening to the sounds that come with the environment: birds chirping, water dripping, etc. As a sign of respect to the environment, we should be using our indoor voices when we are admiring it. Others on this hike did not share my way of thinking. Someone brought their yappy Chihuahua, kids were throwing rocks and other items into the pool, people shouting. Overall, it wasn’t as adventurous or zen as I was hoping to experience.

The best part of our visit occurred as we traveled out of the park. Earlier at the Visitor’s Center, I played with a plush turkey vulture and flipped through a pop-up book on national parks. But here right before my eyes was a real-life turkey vulture eating some carrion in the middle of the road! This giant bird was right in front of my eyes –and it was magnificent. Still in awe over the turkey vulture, not five minutes later, I saw an actual turkey hanging out near the road. I may have seen a turkey before, but not like this. This turkey appeared very relaxed. It was just walking around quietly and looking very regal, like a peacock of the Southwest. 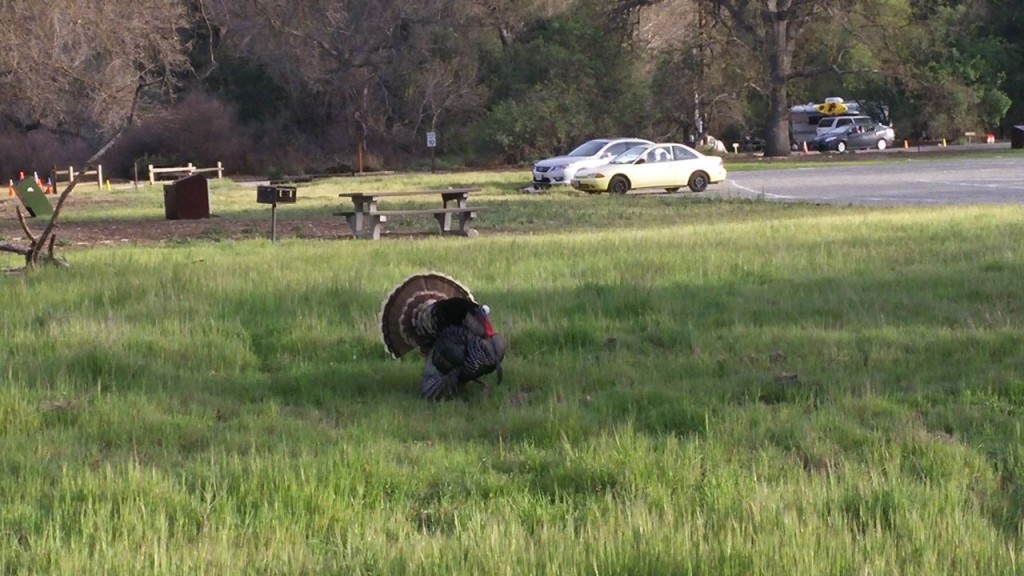 This is part one of a four part series on traveling to and around Monterey, CA.