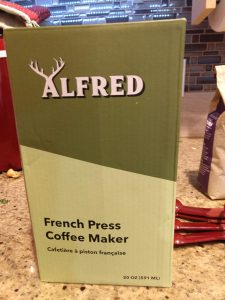 Everyone I know who owns a French press raves about the intense, delicious flavor of the coffee, unlike the burnt taste of a coffeemaker. When I worked from home for three months earlier this year, I imagined waking up early, doing a yoga routine, and making coffee in my first French Press, a gift I received for Christmas and really wanted. Unfortunately, I didn’t do any of those things.
In fact, I spent months staring at the unopened box on the counter where I prepare the cats’ meals. I opted for a few more minutes of sleep, rather than an early morning stretching session and lived my life in leggings, sometimes forgetting to shower. I wasn’t very zen and decided to drink Trader Joe’s instant coffee for the convenience. All I needed for a cup of instant joe was a kettle, mug and spoon. Boil the water for about 5-7 minutes on the stove and done — coffee was ready.
Finally, after six months of reminding myself that I should really use the French press – I took the plunge (badum-tish). My initial thoughts on my first attempt: do not listen to the box on its measurement for how much grounds to use. The first batch of coffee was extremely light. I also had some concerns with the instructions that I read, both on the packaging and in a user guide provided by my favorite local coffee shop. 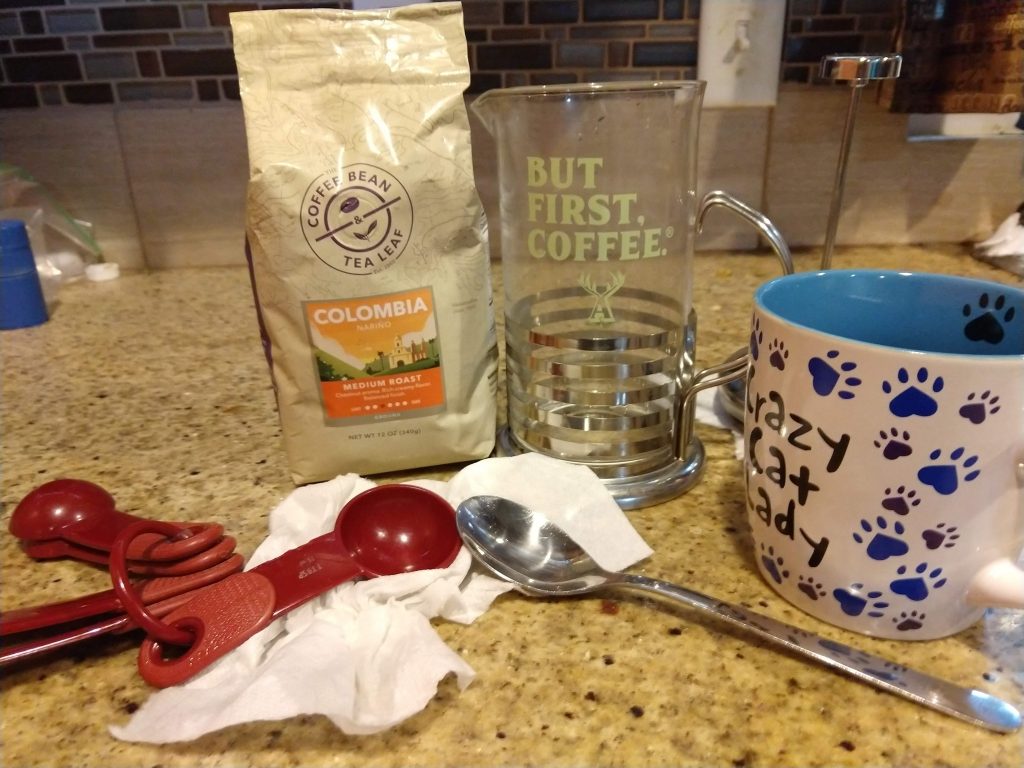 Step One recommended that I pour heated water (not boiling) into the press and the mug I plan to use, to warm it up. What was I supposed to do after the minute of warming up? Do I just dump out the water into th 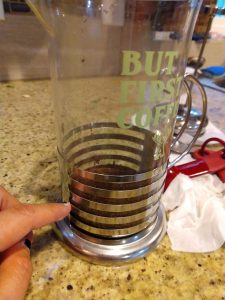 e sink? That felt wasteful, and I just spent time warming up that water. Plus, I have like the world’s smallest kettle and if I didn’t have enough water to fill the press, I would have to start all over. I decided to pour it into a tall mug that I wasn’t planning to drink my coffee from.

After adding the grounds of a mere 2.5 teaspoons and filling the press with water, I then poured the rest of the water from the kettle into the tall mug to see how much was actually left in the kettle. It wasn’t a lot. Next time I’ll just reuse the water that I poured to warm up the press. Or maybe I’ll just skip that step, I’m not sure if that actually helped.

I stirred the grounds with a wooden spoon and placed the cover on top of the press and set the clock. Let’s start at 3.5 minutes, I thought, a good measurement between the suggested 3-5 minutes. After the timer went off, I pushed down the plunger and poured out the first cup.

Overall, the process wasn’t too intimidating for my first try. But I would definitely need to tweak it a little on my next brewing session. I might be able to multi-task my morning routine, preparing the coffee while I feed the cats, but it’s a few more steps than my Trader Joe’s instant coffee.

Final result: the flavor was great, but it somehow tasted watery at the same time. I was torn between hating it and liking it, so I planned to make some changes and try it again. 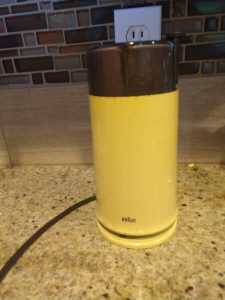 Now I know that some coffee aficionados out there might be crying because I didn’t grind the coffee fresh from beans, but let me explain. I’m already taking 10 minutes out of my day to make this coffee (time to warm up the water, wait a minute for the press to warm up, add the coffee, wait another 3-5 minutes for it to brew), I rationalized that for my first time using a press, I should use some already ground coffee.

I do have an electric hand-me-down grinder from the days when this beige-yellow color, Harvest Gold, was all the rage in appliances (my crock pot totally matches). A friend asked if I had a manual grinder. If I’m not taking the time to grind beans, there is no way I’m going to hand grind my beans.

For my second attempt at the French press, I made several changes including: 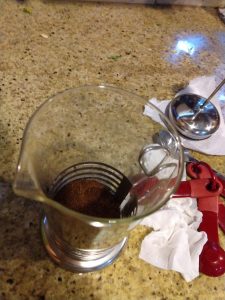 Looking back, maybe I should have changed only one variable at a time, but multiple things needed improvement.

I felt confident that after only one read through the instructions, I could complete the process from memory. I put the kettle on the stove, and warmed the water. This time I added the new amount of grounds. It was way more than what the instructions recommended, but that’s how I like it — like mud.  In my single serve coffee machine at work, I put about 3.5 to 4 tablespoons of coffee for 16 oz of water. Even the TJ’s instant recommends I use only 1 teaspoon and I always use about 1 tablespoon.

I placed the cover on and waited 5 minutes for the coffee to brew. Then I pushed the plunger down and poured a cup. The coffee was steamy, and the odor was rich with the scent of strong coffee, which I took as a good sign. But I was once again disappointed. The coffee tasted weak. How was this possible? How did it taste watery and strong at the same time? I was at a loss. Oh, shoot, I realized I missed a step and forgot to stir the grounds. 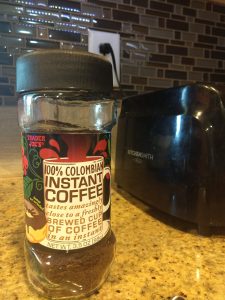 After attempts 3, 4, 5, and 6 (making sure to follow the instructions exactly), I decided that this process was taking too much time for coffee that I didn’t enjoy. A friend suggested I watch YouTube tutorials. I could play around with grinding my own beans and changing amounts of coffee, but overall, I think the the french press just isn’t for me. I’ll just stick to my usual – a canister of instant coffee from Trader Joe’s.
Cost: $7 for a bag of Coffee Bean and Tea Leaf Colombian ground coffee. $3.99 for Trader’s Joe’s 3.5 oz instant coffee.
Drink of Choice: Freshly french-pressed coffee with a splash of hazelnut creamer, followed by a cup of TJ’s instant.
coffee french press instant coffee