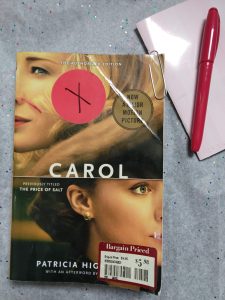 I was surprised to see this in the bargain bin so soon after the theatrical release, but now I understand.

In a span of 36 pages, the story makes a sudden change from a mundane road trip to “We’re lesbians” to “OMG, someone is following us, let’s kill him.” Carol by Patricia Highsmith is a slow-paced novel that has a surprising, but deeply satisfying ending.

Carol, a married woman with a young child, meets Therese, a fledgling theater set designer in her early 20s, by chance while shopping for her daughter at Christmastime. Carol and Therese begin a strange friendship at a time in Carol’s life when everything is falling apart, particularly her marriage. Wanting to get away from it all, Carol invites Therese to join her on a road trip out West.

Carol is a story about lesbians, originally published in 1952 (as The Price of Salt), when this lifestyle was highly controversial. A film version of the book was released in 2015. Noting that the author is also the writer behind The Talented Mr. Ripley, I read this novel with the expectation that it was supposed to be a thriller. Reading in that frame of mind, I expected more action and set up, but ended up bored and frustrated with story.

After reading more than half the book, I was not getting a sense of a thriller at all. Maybe it’s just a slow set up, I thought. The truth of it was that nothing particular interesting was happening. Even the relationship between Carol and Therese seemed to have only a subtle advancement. I started to suspect I was missing something.

There has to be a twist, right? Unreliable narrator novels are popular right now, maybe Carol was just ahead of its time? It reminded of this French film starring Audrey Tautou, “He Loves Me…He Loves Me Not,” where the story appears one way, based on the character’s perspective, but once we see the whole picture, it becomes an entirely different story. What appears to be a sad romance story, starts over and shows us the lonely girl is actually a total stalker.

After driving for a while, Carol receives a telegram that her soon-to-be ex-husband is having a detective follow them in order to fight for full custody. He’s trying to prove that Carol’s “unnatural” behavior proves that she is an unfit mother.The pair go crazy looking for hidden mics in their hotel rooms, searching them from top to bottom. This is what I was expecting when they first set out on the trip. The possibility that someone was following them. Fast forward a bit and Carol decides to confront the detective and tells Therese to get her gun. Well, that escalated quickly.

I was entertained by the way Therese kept coming across the detective, noticing that he was following them or at least thought she was seeing a man with a very similar appearance, sitting in a chair, and smoking. My mind immediately flashed to Lolita with Quilty trailing Humbert, and Humbert’s need to keep moving until they were safe.

After I finished the book, I was curious to see how the movie adaptation would compare to the novel. I watched the movie (with less enthusiasm than before I read the book) and found it just as slow-paced and frustrating as the novel. What made it worse was Therese’s change of career, she’s portrayed as a photographer instead of a set designer, which completely disregards and changes her motives from the novel, and subsequently, everything else. The story doesn’t make sense. Also missing from the movie is Carol’s initial reluctance to starting a relationship with Therese, her internal struggle.

Overall, Carol was disappointing, except for the ending. About 20 pages from the end, we finally see a transformation in the characters. Therese has changed and grown, and finally has the confidence to know what she wants and go after it. Maybe that was the whole point of the whole story, not the journey, but the outcome. However, reader beware, for 189 pages, it’s nothing but filler.