After a year of my reading challenge, I have finally reached the end. In 2015, I set a goal to read 50 books and although it was a sluggish beginning I read a total of 25 books. My reading list had a mixture of cat stories, old stories, some tedious stories and some great finds. The majority read were, no surprise, cat-themed cozy mysteries.

Even with the Weekend Wednesdays, I was only able to accomplish half my goal. The problem I’m having with reaching my goal is it’s set too high. With my social obligations and time spent gaming, it’s just not possibly for me to read that many.

But the goal wasn’t always about hitting 50; it was about dedicating myself to reading more books and discovering new worlds. 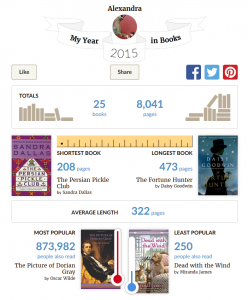 My stats from Goodreads for 2015. Looks like only a select few also enjoyed Dead with the Wind  like I did.

I think my favorite part of this reading challenge was discovering new authors and then devouring their entire catalog. For me, there were two writers in particular that I loved: Miranda James and Leann Sweeney. I finished off the rest of the “Cat in the Stacks” series this year and read the newest novel in the “A Southern Ladies Mystery” series. I also consumed three books of the “A Cats in Trouble Mystery” series over the past year and realized after the first installment, how much I loved the character, Jillian Hart. She is an easy going woman who moved to a small town in the South with her husband.

The series begins with Jillian living in her house by the lake, with only her three cats and memories of her husband, who died shortly after moving to South Carolina. Living by herself, Jillian creates kitty quilts to sell online and at conferences. What I like most about her character is that she wasn’t a retired cop or investigator or a writer working on a book (something I was beginning to see a lot of) –but that she could be an actual person, with a dedicated career and hobbies. Every time I read a cozy after that, I kept thinking the main character was Jillian and I had to go back and remind myself that she wasn’t in this series.

I was also astounded at how much I loved a book that had absolutely no cats in it. The Persian Pickle Club by Sandra Dallas is about a group of quilting friends living in the Kansas during the Depression. What I remember the most is that the main character, Queenie yearned for a replacement of her best friend, Ruby, who had recently moved away to California. This one helped me cope with a similar situation when my close friend moved more than 200 miles away. When I browsed through Dallas’s other books and saw she had written about the Mormons,  I was thrilled. After reading The 19th Wife by David Ebershoff, I was interested in perusing more Mormon fiction.

Last year I also experimented with checking out e-books using Overdrive, something that had previously intimidated me. And while a majority of the books I read were rentals from the library, there were two that I absolutely wanted my hands on. I pre-ordered physical copies of the cozy mysteries, Black Cat Crossing by Kay Finch and Dead with the Wind by Miranda James. I felt like a silly fan girl when I ripped opened the packages on their release dates.

For Christmas, Joey gave me the new NOOK GlowLight by Barnes & Noble, which was the only thing I wanted for Christmas this year. I was reading rented e-books on my cheap tablet and found that the glare on the screen was overwhelming, especially outdoors while I was trying to relax lakeside. While I spent most of last year reading whatever books were available in Overdrive, this year I have a dedicated reading fund. One of my Christmas bonuses was a $50 Visa gift card, which I registered to my new NOOK right away. For my first purchase, I chose another cozy tale featuring Jillian Hart: The Cat, the Wife and the Weapon.

Drink of choice:  Cold brew coffee, one packet of Sugar In The Raw, two packets of sugar